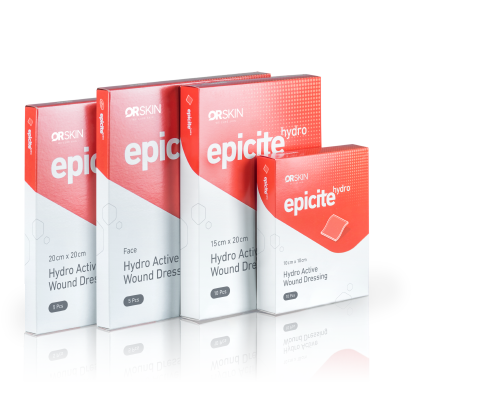 Suitable for combined use with common antiseptics

In an in-vitro study we have analysed the use of epicitehydro with common antiseptics. The uptake of antiseptics into the wound dressing, its release and its inhibition profile against Staphylococcus aureus (S. aureus) were determined.

epicitehydro shows a fast and efficient uptake of antiseptic solutions

Among the six antiseptic solutions tested, five wound dressings had an uptake of more than 40% of the active compound after soaking 30 min only (Fig. 1B).

In order to mimic the use in a clinical setting, two 10 x 10 cm sheets of epicitehydro were soaked in 200 ml of an antiseptic solution in a kidney dish (fig 1A). 6 different antiseptics were tested, and the concentration in each sheet was determined after 10, 30, 60 and 120 min and compared to the concentration of the starting solution (fig 1B).

Octenidine and Lavanid 2 show a sustained and prolonged release from epicitehydro, whereas Prontosan and Mafenide have a faster release kinetic (Fig. 2A). The epicitehydro dressing loaded with Betaisodona® shows an efficient release over a period of 24 hours, while the release of the commercially available Betaisodona® Wundgaze is no longer visually detectable after more than 6 hours (Fig. 2B).

A: Punches of epicitehydro loaded with different antiseptics were placed on an agarose matrix for 1, 3, 6, 12 and 24 hours and the remaining amount of antiseptic in the punches was determined and compared to the starting concentration.

epicitehydro loaded with antiseptics is efficient against Staphylococcus aureus

Burn wound progression is a significant problem as burns initially thought to be superficial can actually become full thickness over time. Cooling is an efficient method to reduce burn wound conversion. However, if the cooling agent is below room temperature, the patient could be at risk for hypothermia, depending on the size of the wound.

In a human ex-vivo study we investigated the effect of cooling on intradermal damages from a contact burn of 100°C. For cooling by evaporation, we used non-precooled epicitehydro which is composed of more than 95% water.

Intradermal temperature in the burned skin is reduced significantly when covered with epicitehydro compared to the non-cooled skin samples.

In a human ex-vivo model, skin explants underwent contact burns using a 100°C hot steel block. The burned areas were divided into two groups of which one was cooled with epicitehydro. Intradermal temperature was measured as shown in fig.3A in cooled and uncooled burn sites over 24 hours. Fig 3B shows the temperature difference (uncooled-cooled) calculated for the first 60 min.

epicitehydro reduces the intradermal damage of the skin

Biopsies of the burned areas were taken at different time points and histologically scored for the grade of oat cell degeneration & necrosis (CDN; 0= no – 5=high) or dermal-epidermal separation (DES; 0= no – 5=high)